The Raider Review • May 13, 2022 • https://erhsraider.org/15618/top-stories/live-theater-returns-to-roosevelt-review-of-superheroes/ 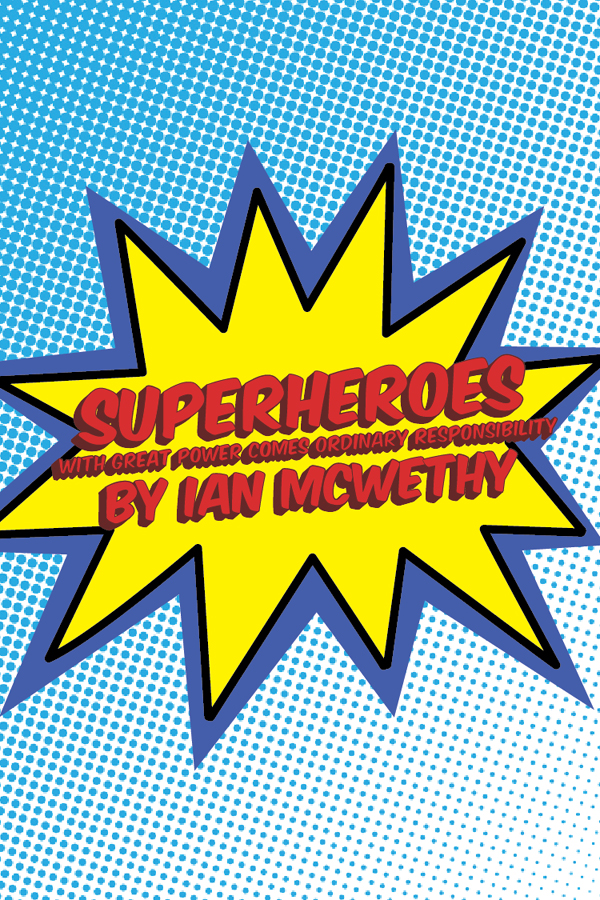 Playbill for Superheros, courtesy of playscripts.com

After over two years of no in-person productions by Roosevelt’s Drama Department, live theater made a stellar return to ERHS last Friday with the in-school performances of the play Superheroes.

The play was performed last Friday, April 29, during school hours because of continued restrictions placed on the arts, courtesy of the ever-present COVID pandemic. There were two performances, occurring during periods 4 and 5.

Roosevelt’s interpretation of Superheroes was very charming and brought so many unique things to the table. The students overcame their many restrictions to put on a great production. What their relatively uniform and basic costumes lacked was made up for by the cast’s character intentions and choices including their employment of different voices and physical archetypes, or caricatures. They made the most out of what they had and it paid off. Despite only having two main set pieces as well, those being a bench and table, they had creative solutions including excellent scene changes and creative blocking. The students more than succeeded in creating the “world of the play.”

Despite the cast’s excellent work, the in-school performance requirement did have some unfortunate effects. This made it so that a majority of Roosevelt students could not see the hard work of the Drama department. This also means that parents, friends, and Greenbelt community members could not see the show. Additionally, because this was during school there were several interruptions including patrons coming in late from other classes, blaring band class, and an announcement on the PA system.

The cast and crew were also limited time-wise in putting the show together. At the beginning of the performance, Drama Advisor Ms. Hawk announced to the audience that these students normally prepare a play for eight weeks, but that this group only got “eight rehearsals.” While that is a significant time constraint, the play selection lended well to their limitations.

Superheroes’ use of vignettes makes for many short, funny bits that showcase a lot of variety in plot and characters. The play focuses on the lives of superheroes when they are “not on the job.” It showcases the struggles of heroes doing their best to live a normal life. The characters struggle to cope with the mundane parts of life like “doing the laundry” and the extreme juxtaposition with their jobs saving the world.

The heroes’ attempts at living a “normal life” at times backfires. Some of the characters, especially Batman played by Matthew Daughtry-Weiss and the Hulk, played by Senior Laila Anderson end up bothering the non-hero characters. This makes for a lot of comedic irony.

Superheroes is a work that presents the classic tropes, puns, and cliches that audiences love, and it does so in a tasteful manner. Its at times dry humor and clever relations to real life mix with obscure comedy (like a sidekick being afraid of the color yellow) to create a really interesting play.

The casts’ interpretation of the material paid off, as many enjoyed the show. Mr. David Eisenberg brought his Research Practicum class to see the play and said that the play was “great” and that “all of the students involved were fantastic.” He had several current and former students involved in the production. This was a motivator in seeing the show, as he reasoned that “the students work very hard to put on these plays, so [he] [tries] to support them by seeing the shows.”

Senior Kaday Jarra also saw Superheroes and thought it went “really well.” Jarra particularly enjoyed Anderson’s performance as The Hulk. She loved Anderson’s “blocking, projection, acting, and chemistry” with her scene partners. Like Jarra, the at first quiet audience came alive during Anderson’s first scene. In addition to The Hulk scenes, she also really enjoyed the “integration of the deaf actors and audience members.”

Roosevelt’s production of Superheroes included two deaf actors and had two interpreters on stage at all times. Aly Seck was hilarious in his portrayal of a fan confusing Hawkeye for Batman in the opening scene and Katrina Ifurung was spot-on in her portrayal of a Spiderman super-fan.

While ERHS does have a vibrant deaf community, unfortunately hearing and deaf students do not interact very often. Therefore, it was wonderful to see these students perform in Superheroes. The blend of sign and speaking and hearing and deaf actors made the play extremely dynamic. It was also an important step in increasing accessibility and representation at Roosevelt.

Superheroes appeals to many audiences; from the adult-targeted jokes about taxes, to the presence of superheroes and superfans that appeal to little ones, there is something for everyone.

The play also worked really well for a high school audience, as it had a lot of relatable content for teens. The heroes grapple with ever-present feelings of despair, depression, angst, burnout, insecurity, self-doubt, shame, imposter syndrome and coping with standards and comparison. Those same emotions felt by the heroes are all applicable to the teen struggle. Superheroes disguises therapy as monologuing  and confessions and “side-kick support groups.”

This play is not only relatable, but sneakily normalizes taboo subject-matter and makes viewers feel seen. And Roosevelt’s students did an excellent job in producing this play, especially given the circumstances.