Coffeehouse: Behind the Scenes 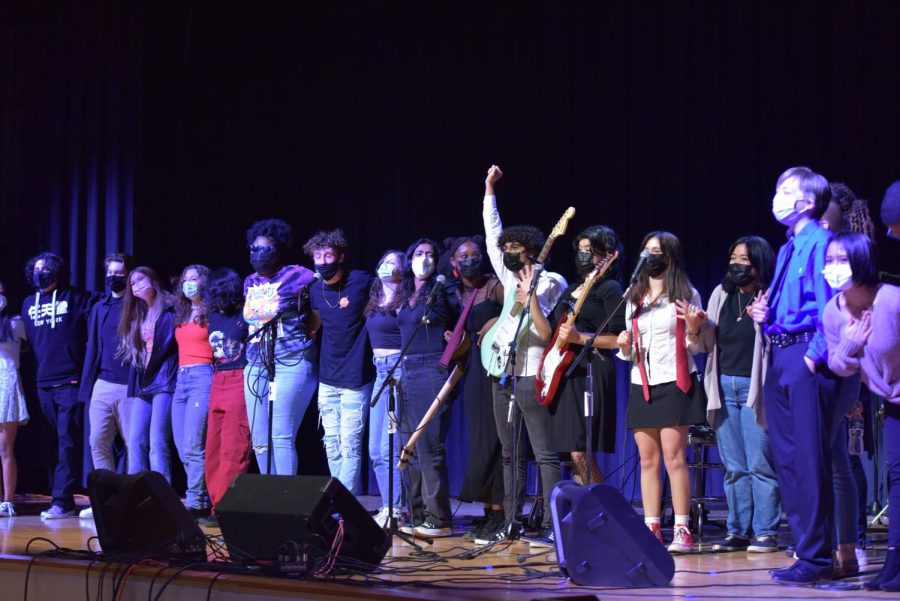 Lola Odebo, a 22’ senior, who attended the event, said “everyone was so talented” and she liked every performance. She expressed her particular interest in “Traitor”, sang by Sydney Taylor accompanied by Reanne Salazar on the piano, “Dandelions” sang by Corey Bast and Sydney Endres accompanied by David Akinkuolie on the piano, and a mashup of “Sugar” and “Show Me How” performed by ‘Immigrants I Trust’.

For many like Odebo, this is their last year at ERHS and this show was a perfect way to celebrate the talented individuals in the Roosevelt community one last time.

Coffeehouse has always been a student favorite event, but what actually takes place in order to make the show?

Mr. Hawk began selling tickets throughout the school day during the preceding Thursday and the show was sold-out by midday Friday. Due to covid restrictions, Coffeehouse seating was limited to two-hundred seats.

All performers sent in an audition video or performed live before April 7th. After the audition process, students spent the next few weeks practicing with their group members before attending a soundcheck the night before the show.

On the day of the show, performers began arriving at 6:15pm and went to the dressing rooms behind the stage to warm up, tune instruments, and let out their nerves.

Sydney Endres, a 22’ senior, who performed at Coffeehouse discussed what was going through her head before going on stage—”This was not my first time performing, but I still felt the jitters.” While performing she noted she “blacked out a little on stage… I don’t fully remember what my face looked like or if I hit every note, or strummed every chord I was supposed to because I was just so excited to finally be performing again.”

Sharing a similar experience, 22’ senior Sydney Taylor expressed that although he had performed in front of people before, this was their first time performing in front of his friends and peers which was “nerve-wracking”.

Mary Gbenro is also a 22’ senior who expressed she was anxiously trying to change the batteries in her bass before the show started, as this was her first time doing so. After getting out the screws she could not get the backplate out, and she ended up performing with the same batteries and prayed they did not stop working mid-performance.

Gbenro explains the whole experience was an amazing opportunity as she was able to “be a part of a Roosevelt culture that I’ve only ever seen from the outside.” She notes her experience was also “bittersweet” as she wanted to perform at Coffeehouse since her sophomore year, but now her first performance was also her last.

Another performer, 22’ senior AJ Fontaine, said they and their musical partner, Grace Rankel, were more than prepared, as they had been practicing by themselves and with other members of their band ‘Can We Keep It?’. Fontaine noted they were stressed coming into the dressing room but “everyone was so positive and the air was absolutely buzzing with excitement” which calmed some of their nerves.

Fontaine also mentions they have been a performer their whole life but “after such a long hiatus from live theatre and music it was incredibly refreshing to get back up there.”

When asked about the castmates, Endres explained that they were “super supportive… heavily cheering people on in the wings of the stage and giving people an overwhelming amount of support right when they came off stage.” She also mentions it was an amazing feeling to be able to experience a sense of community again.

Gbenro agreed the castmates were really supportive and excited, and there was “a lot of dancing and complementing, and everyone was quick to lend a helping hand when needed.”

Coffeehouse is a community-favorite tradition that students are passionate to have back at Eleanor Roosevelt High School and many look forward to next year’s show.