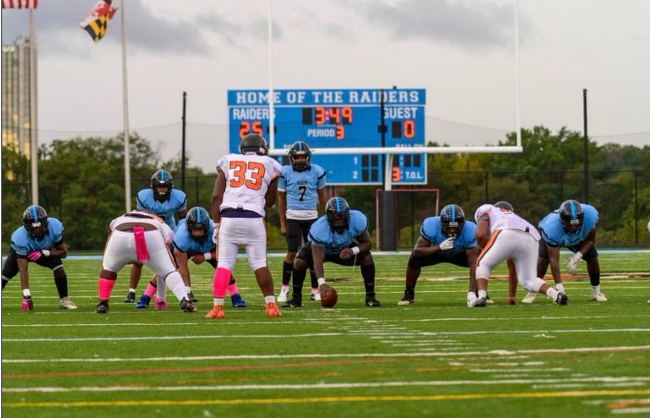 Every year, schools across the county have a homecoming game, which is a big and highly anticipated event that is led up to spirit week, the pep rally, and other fun events that the school may decide on. This year the ERHS football team faced off against a school not too far from them, the Duval Tigers. Duval may not have the best team this year, but anything can happen on homecoming.

ERHS Star Wide-Receiver (WR) Larry Boone, had been interviewed after their performance in the game. Boone mentioned a few things he loves about playing a homecoming game, such as “the atmosphere and all the supporters coming to watch us.“ Boone also stated, “Today was a good day as I speak for myself and the rest of the seniors that we enjoyed our last homecoming with Eleanor Roosevelt High School”. Also, when asked about his attitude heading into this well-hyped game, he stated “My mindset going into the game was to get better as a team, especially after the loss last week but also do my best I can for the team to help us win”.

Despite the pouring rain that began in the second quarter, Boone finished the game with two receiving touchdowns and really had a major impact on the Raiders’ win.

One of Boones touchdowns came from season starting Quarterback (QB) Martez Barnhardt, who surprisingly didn’t start the homecoming game against Duval, because of him “being selfish and not thinking about the team”. This resulted in him sitting out the first two quarters. He had this to say about his touchdown pass that came shortly after entering the game to extend the raiders lead, “ I didn’t prove anything really. It isn’t anything new to the team but it might be something new to the fans. I have a whole lot more to prove to everyone and this is only the beginning. ” He also added that his attitude for the rest of the game was to “finish and come out on top of the game and lead the team to victory.” That which he did, as the bad weather proved meaningless, as the Raiders won with a 25-0 lead over the Duval Tigers.