The Raider Review • May 17, 2021 • https://erhsraider.org/14963/student-life/difficulties-being-an-erhs-journalist-during-the-pandemic/

Difficulties Being an ERHS Journalist During the Pandemic 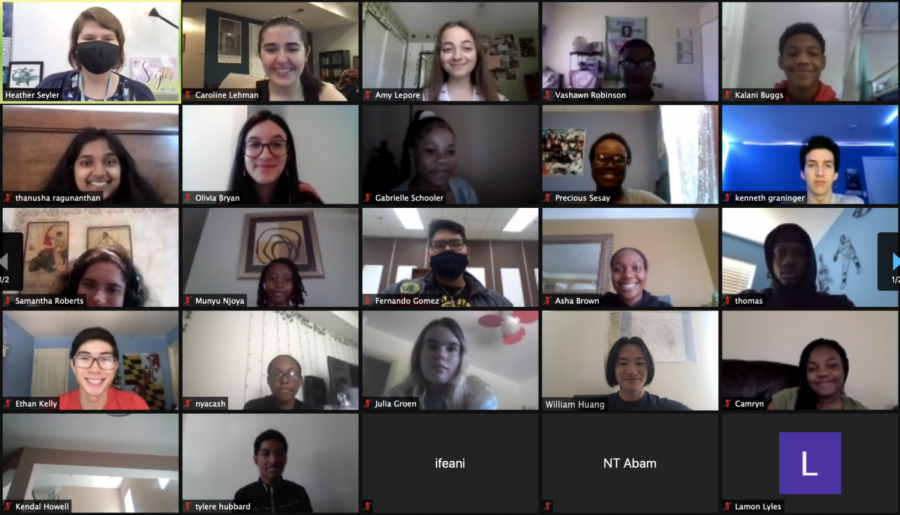 Journalism, among many other activities, has been disrupted in an unprecedented way during the COVID-19 pandemic. The challenges that coronavirus has brought upon journalists have forced many to lose their jobs. For those who have been able to continue writing, quarantine restrictions have made it difficult to operate like normal. For Eleanor Roosevelt High School (ERHS) Raider Review journalists, the situation is no different.

The ban of Zoom breakout rooms – a tool on Zoom that allowed participants of a meeting to meet in smaller groups – during the beginning of the year has been part of the big issue as to why “it was hard to work in groups,” according to Ms. Seyler. Despite this, however, she was able to find alternatives to get her students engaged. In addition to the usage of Google Meet for small group meetings, Ms. Seyler found ways to engage her students in brainstorming new ideas with tools such as Jamboard, Google Docs, and Pear Deck.

Senior Raider Review Co-Editor-in-Chief Asha Brown, a second-year journalism student, expressed her distaste over online collaboration. “Brainstorming articles is different because we used to collaborate in person and bounce off of each other’s ideas personally and now we [use] Google Docs and Jamboard which still gets the job done but it is not the same.”

Another adjustment that Brown and many other students experienced was with the interviewing process for articles. According to Brown, instead of the conventional in-person conversational interviews conducted for articles, many members of the Raider Review had to resort to “email mainly.” For many, the greater planning required and lack of flexibility in asking questions on the spot with emails made collecting information for articles much more difficult than in past years. Additionally, many writers, such as junior Raider Review staff writer Fernando Gomez, felt the process took away from the “journalist feel.”

On top of the technical difficulties present during the pandemic, there have been personal tolls on journalists. According to a study by the International Center for Journalists (ICFJ) and the Tow Center for Digital Journalism at Columbia University, coping with the pandemic alone has caused “at least one negative psychological effect, including anxiety, burnout, difficulty sleeping and a sense of helplessness” for over 80% of journalists.

Brown had similar difficulties during this time. “The hardest part for me was finishing my articles in a timely manner. During the pandemic, I have been a lot less productive and I have been working slower in all my classes.”

The lack of a physical paper may also be another unmotivating factor in this environment. Ms. Seyler felt it was “really sad and difficult” that not even a single hard copy could be produced this year due to the logistics of how people would need to “get it.”

Ms. Seyler did point out, however, that despite the traditional way of sending out papers not being not possible, it could be a blessing in disguise. She believes that with only an electronic version of the paper being focused on, an even “farther audience” could be reached which could lead to more recognition for the Raider Review and a “wider audience.”

There have also been some other positive adjustments to this unique situation.

Ms. Seyler feels that not being in the confines of the school building actually made her class think outside the box and lead their stories to new possibilities. She explained, “we have to kind of broaden our horizons about what we’re writing about, thinking about, and who we’re talking to.”

Gomez was one of the journalists that took advantage of the broader scope of ideas and opportunities he could delve into. For his first article, “Want to play college baseball but had a bad freshman year? Don’t worry.”, Gomez was able to get into contact with MLB prospect Nathan Duarte. Another Raider Review journalist, junior Arts & Entertainment Editor Caroline Lehman, dedicated a feature article to congressman Jamie Raskin. Several other Raider Review journalists were able to get into contact with business owners in the Greenbelt area for exclusive interviews.

The broader scope that the Raider Review covered during the pandemic also had the added benefit of allowing the class to take part in deeper, memorable discussions. Ms. Seyler conveyed her appreciation of the “difficult” but “meaningful” conversations on “the interaction at the Capitol, the gun violence in Atlanta, and Derrick Chauvin trial” during her class.

Brown had a similar attitude towards the tough discussions that occurred in journalism class year-round, saying, “My favorite moment in journalism during the pandemic has been all the current event discussions. There have been so many newsworthy events this past school year and hearing everyone’s opinion is something I’ve enjoyed.”

Brown also expressed the positive growth during this period that she views as a factor that may benefit her as she heads to Howard University for the Media, Journalism and Film – Journalism Concentration program. “This unique journalism experience has taught me how to adapt to changes and since Journalism is a field that is constantly evolving, I feel that now I have the ability to evolve with it in the future.”

For the newspaper itself, the increased reliance on new software pushed Roosevelt’s school newspaper to try out a new medium — podcasts. For the first time in Raider Review history, a near hour-long podcast, “Raider Review Podcast: Media’s Top 20 Of 2020” by journalists Amy Lepore, Caroline Lehman, William Huang, Fernando Gomez, and Kendal Howell, was released on its website. Not only could this expand the paper’s audience, catering more to people with auditory preferences or visual disabilities, it also proved to be an excellent experience for the podcasters involved. Gomez enjoyed the “talk” while producing the content and became “friends” with his peer podcasters.

It is unquestionable to many members of the Raider Review that the pandemic has affected their experience in a negative way. However, students’ constant perseverance and adaptation in the Raider Review have allowed it to continue thriving. With 39 students and over 100 articles written this year, journalism in Roosevelt has grown more immune to COVID-19, taking it on one story at a time.