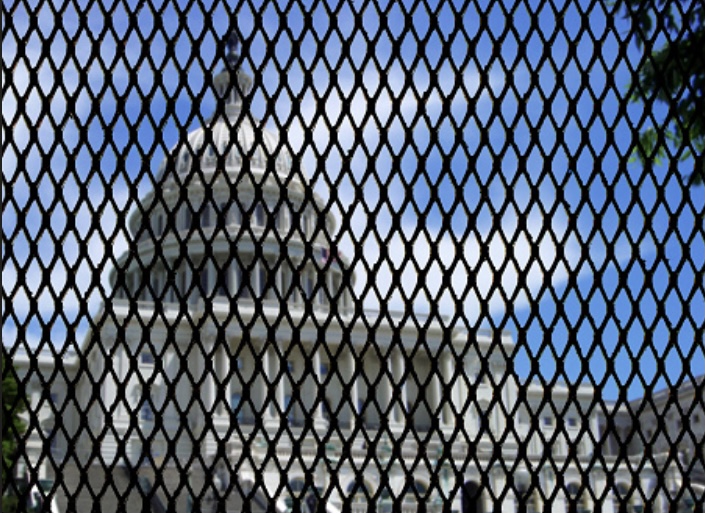 The fenced off Capitol building. Image courtesy of magdeleine.co .

Just six days into the New Year, on Wednesday January 6th, the United States Capitol was stormed by a group of violent Trump supporters attempting to stop the count of the electoral votes from the 2020 Presidential election. The rioters’ actions were influenced and encouraged by then lame duck President Donald Trump, his allies, and fellow Republican members of Congress. Trump’s personal attorney, for example, said “Let’s have trial by combat!” at the “Save America March” that preceded the storming of the Capitol.

Following the uprising, an article of impeachment against former President Donald Trump was drafted for inciting an attack on the United States Government. Exactly one week after the attack on the Capitol, on January 13th, the House of Representatives voted 232-197 to impeach Donald J. Trump. The article, signed by Speaker of the House Nancy Pelosi, was delivered to the Senate on January 25th and the Senate impeachment trial began on February 9th.

The following Wednesday, January 20th, former Vice President Joseph R. Biden was sworn in to the office of the Presidency. Then Senator Kamala D. Harris took the oath of office for the Vice Presidency, becoming the first black, female, and Asian individual to hold the position. After four tumultuous years in office, the end of the Trump era and beginning of Biden’s administration marks a huge change in the country.

Students at Eleanor Roosevelt High School (ERHS) have grown up during this particularly divisive era of politics in our country, and have a unique perspective on the recent trifecta of political events in the country. Junior Ada-Iba Agbu said that January’s events made her feel no different than the political happenings of last summer. She recalled that growing up in such a political climate has forced people our age to “mature in a way.” Agbu noted that any teenager that does not know something about politics in this country “has not been paying attention.”

However “used to” political happenings students are, the insurrection still came as quite the shock. President of Model United Nations and Co-President of the Civics Society at ERHS, Raihan Choudhury declared that the events of January 6th “shook [him] to the core” and “angered [him] deeply.” Many Roosevelt students felt especially shocked that these events were happening so close to home, Agbu noted that the Nation’s Capitol is “practically in [her] backyard.” Junior Stephanie Boyd observed that it felt like she was “watching the Hunger games” and thought a lot more people would die than did.

Following the violent insurrection, the inauguration brought many mixed emotions. Junior Sydney Endres recalled that it gave her “more hope than [she] could imagine.” However, she was also nervous that, considering the events of the insurrection, “something would go wrong” during the inauguration. The events of January 6th continue to stay relevant in the course of the impeachment trial. Raihan Choudhury stated that the impeachment process has “harked back painful memories” that incite “sorrow.” He went on to say that it is hard to rewatch the “brutality” of these “act[s] of terrorism unfold in our hall of government.”

Despite the extremely negative and upsetting nature of many of the January political events, one positive emergent from them is the increase in political knowledge it has given students. Sydney Endres remarked that she learned more about the processes of impeachment and inauguration, saying she specifically understood more about the Constitution and the President. Another positive outcome has been the newfound hope, especially from Inauguration. Raihan Choudhury noted that it was “refreshing” to hear the “call[ing] for unity.”