How I Picked My College Using Online Resources During the Coronavirus 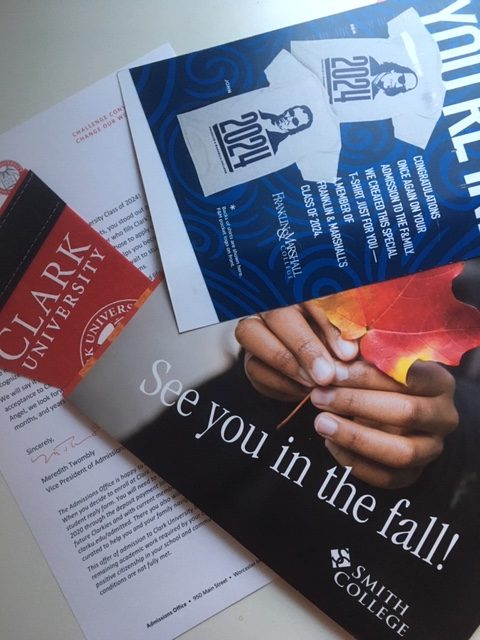 Now that we are all practicing social distancing and rarely leaving our houses, there are a few tasks made significantly more difficult to accomplish when you can’t leave your house. Right now, like everyone else in the class of 2020, I find myself in a strange position. I’ve gotten back all my college acceptances and am expected to pick a school to attend next year. Back before COVID-19 engulfed the world, I had planned on making my decision based on three basic elements. Those were, in order: affordability (financial aid and scholarships), programs and perks (course offerings, quality of housing and food, internships, research, quality of athletic facilities, opportunities for study abroad), and campus vibe.

Fortunately for us all, a campus visit isn’t needed to get your financial aid information or to discuss affordability with your family. Unfortunately, it becomes very difficult to judge programs and perks without going to campus, and it becomes almost entirely impossible to deduce campus vibe without walking around on campus. However, I made it my mission to find virtual and computer based resources that helped me, and will hopefully help some of you, get all the information you need in terms of programs, perks and vibe without being able to visit or revisit your top schools.

By the time March the 25th rolled around, I had all five of my acceptances back and had ordered them from most affordable to least affordable. With the help of my parents, I eliminated a few based on cost as well as memory of my initial impression of the school. From there, I re-visited the websites of the three schools I was still seriously considering, Smith College, Clark University and Franklin & Marshall College.

Each had videos that reminded me what campus looked like (all the schools left in consideration I had visited before but a very long time ago), photo albums that showed facilities and students through the seasons, page after page of information I could read, as well as what I refer to as “propaganda fluff” that sounds nice but doesn’t really tell you much about the school.

I picked my way through as much of it as I could manage but in the end just felt overwhelmed and started confusing the schools with one another because I had read too much in too short an amount of time. I needed to switch tactics.

I wrote down on paper everything that I remembered about the schools, emphasizing the elements which I thought were each school’s biggest selling points. I came up with questions as well, but in the end, I didn’t have so many that I needed to write them down. Then I went to my number one resource in my college decision process: my dad. He pointed me towards my email and brought to my attention that I had received several emails from different schools containing information about webinars and Zoom info/question and answer sessions which would be happening over the next two to three weeks. I decided to attend at least two of these virtual info sessions for each of the schools I was still considering.

The first two on my list were for Smith. I had been accepted into a research/scholarship program called STRIDE which I knew very little about, so the first Zoom session I attended was the info session for STRIDE. Most of the 50 other students who had been accepted were on the call as well as current Smith students who were part of the program and faculty members who had various roles within the program. A brief overview of the program was given, the current students shared anecdotes about their experiences and the projects, then the session was opened up to audience questions. We were told we could ask questions using the raise hand feature and then speaking the question aloud or by typing into the chat feature. Almost everyone chose to use the chat feature. To me, this time was extremely helpful. Others asked questions I would never have thought to ask and all the uncertainty I had about potential workload due to the program was eased. It was very informative and I don’t think I could have made a well informed decision without attending this session.

The second Zoom meeting I attended for Smith was open to all admitted students and was a simple Q&A session. Once again, almost everyone asked all their questions through the chat feature. The session reminded me of information I already knew about Smith but did not necessarily teach me anything new about the school. It wasn’t a waste of my time but it didn’t greatly improve or diminish my opinion of Smith.

Next I attended the sessions for Clark. I chose two info sessions to attend both of which were described as webinars. The first was titled FYI and First Year Academics and the second was all about clubs and extracurricular activities. The meetings were different from the meetings I attended at Smith in that the host used the share screen function so the meeting more closely resembled a powerpoint and a lecture. My camera and mic were automatically off so no one was on the screen other than the host and a few current Clark students. Another difference was that the Q&A feature had been enabled which was a different way for attendees to type in their questions and then the host could answer them aloud or send links in response.

I found this setup to be slightly less effective than the setup Smith had used only because, since no one could see me I had no external pressure to appear interested so it was hard for me to focus on the content of the presentations. The content of the webinar labeled FYI and First year Academics was very informative. FYI refers to First Year Intensives which are courses all freshmen take. They can be on a variety of topics, related or unrelated to major, with varying class size. The webinar helped give a good overview of what academics would look like for a first year student. Listening to the current students talk about their experiences with FYIs and Clark in general also gave an idea of on campus culture. The session about clubs was less helpful; it turned into individuals asking questions about specific clubs, most of which I do not have interest in. Ultimately I think the first session I attended ended up being a very large part of my decision making process because I learned much that I did not know about Clark, it gave me a better idea of a few of the things Clark students are interested in.

Next, I had every intention of attending a few Zoom sessions for Franklin & Marshall. However, as is the theme with all of 2020, things did not go to plan. The sessions for F&M were scheduled for after I finished the sessions for Smith and Clark. I spent the next couple days letting all the information I already had marinate in my head for a bit. Over the summer of 2019 I had luckily been up to visit Franklin & Marshall, and I had walked away from that visit feeling neutral about the school. It hadn’t left a great impression or a bad one. In contrast, I was starting to like Smith more and more. I could see myself on campus in a way I just couldn’t picture with F&M.

There were two last factors which really pushed Smith over the top for me. I received two personal emails, one from a current student in the Sociology department and one from a professor in the Exercise and Sports Studies department. Those were two areas I expressed interest in when writing my application, and the fact that two extra people outside of admissions took time to read my application and reach out personally just reinforced everything I had come to believe about the culture of support and positivity at Smith. Lastly, every person my family or I mentioned Smith to had nothing but positive stories to share about the school. So many people in our neighborhood had sisters or wives or daughters who went to Smith and loved it. At this point I really couldn’t find a single reason to not pick Smith.

I had made my decision before I truly even realized it. I picked Smith.

Here are the resources I found most helpful when picking my school. I hope they help you too.

Virtual tours on websites – If you haven’t had a chance to see campus, it obviously just shows you what campus looks like but you will also learn about different opportunities and programs simply based on the facilities showcased in the tour
Videos created by admissions – You should probably take these with a grain of salt as they are essentially ads. However, it can be helpful to see what a school presents as its best attributes in order to get a general impression of the priorities of the institution.
Webinars or Q&As on Zoom – Although some formats are better than others, these sessions can be helpful in reminding you of information you knew but forgot, teaching you about programs you didn’t know existed, get the answers to questions you would never think to ask yourself, give a sense of the all important campus vibe.
Emails with admissions officers/faculty members/current students/coaches and trainers – Get the answers to more personal questions or learn about specific majors and programs while also getting an indication of how much support you might potentially receive if you were at that school based on their willingness to interact with you.
Talk to past or present students and faculty if you have the connections – They can give you anecdotes about their experiences which will give you a very good picture of campus culture and vibe.

The biggest difference the Coronavirus has created is that now you will have to reach out and do the work to learn about the schools.  You can’t be a passive participant in this process and just wait for the campus visit to come. Resources do exist which will help you make your decision; you just might have to do some serious digging to find them.